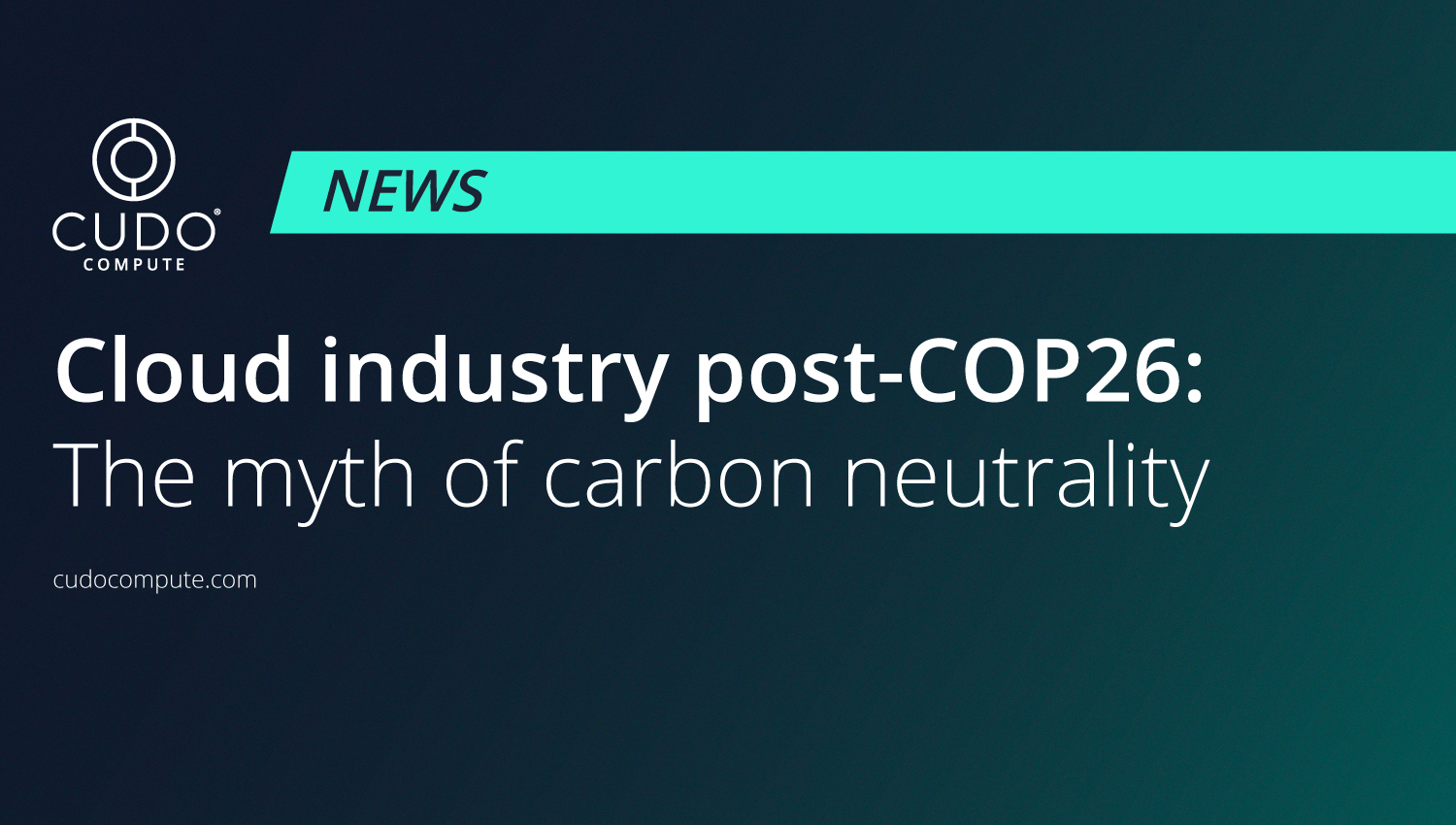 The 2-week long COP26 climate summit concluded in Glasgow on Saturday evening with an uninspiring deal that commits states to limit global warming to 2.4°C above pre-industrial levels, falling well short of the 1.5°C target. As the curtain falls on what some already consider another missed opportunity, an important question that emerges from the talks is how to ensure that the sectors that will see the most growth in the future remain invested in environment-friendly technologies.

The cloud service industry is one of the fastest-growing sectors in the world today. Accompanying that growth has been a rise in the creation and maintenance of energy-guzzling data centres. Recent reports suggest data centre facilities take up 3% of the global energy consumption and are soon expected to reach the 8% mark. Centralised cloud service providers such as Amazon, Microsoft, and Google have all claimed to be currently “carbon-neutral” and are ostensibly on course to achieve net-zero status by 2040. But do these claims stack up to reality? To answer this question, it is important to understand what is meant by the phrase “carbon neutrality”.

What does it mean to be carbon-neutral?

The idea is that under this scenario, total emissions are reduced by offsetting emissions with emissions savings elsewhere. Suppose a company emitted x amount of carbon but pays someone to plant y number of trees to “balance” the tradeoff between carbon emission and absorption. In that case, it effectively becomes a carbon-neutral company.

While some have argued that carbon neutrality is a relatively better corporate approach to the environment, it is not a comprehensive solution. Carbon offset possibilities are naturally limited. For instance, there is a limit on the number of trees that can be planted. In addition, there is presently no means of verifying corporate carbon offset claims. Below is an overview of the three major cloud service providers and their current carbon status.

The image below show’s cloud computing services by market share

Amazon aims to be carbon-neutral by 2040. The company has provided little or no information on its scope three emissions (GHG emissions emanating from a company’s overall value chain). There is no clear roadmap on how it aims to achieve its 2040 target. Greenpeace USA stated last year, “Amazon is still doing more to accelerate the climate crisis than solve it”.

Microsoft admits: “Like most carbon-neutral companies, Microsoft has achieved carbon neutrality primarily by investing in offsets that primarily avoid emissions instead of removing carbon that has already been emitted”. It has claimed to be 100% carbon-neutral but admits it must strive to achieve scope three decarbonisation by 2030.

In its 2020 climate change response, Alphabet, Google’s parent company, states, “we are carbon-neutral through the purchase of high-quality carbon offsets”. The company has not provided any details on specific offset projects it has invested in. Like Microsoft, Google effectively exercises oversight over its environmental sustainability pledges and actions.

Is carbon neutrality an unhelpful concept?

The notion that centralised cloud services providers are carbon-neutral is a marketing ploy to avoid deeper environmental scrutiny and external regulations. Carbon neutrality, as Microsoft has now admitted, does not spur decarbonisation initiatives and provides a false sense of security while the prospect of meeting the 1.5°C target diminishes by the day. A more meaningful path forward is to envisage a future where cloud services are guaranteed without hyperscale data centres and their harmful environmental effects.

Could we decentralise the cloud?

Cloud decentralisation is an obvious solution to most of the industry’s challenges today, including the environment. Take our Cudos network, for example, a bold blockchain project that aims to create compute and storage capacities across a distributed network by exploiting existing spare compute capacities. By realising this goal, we will be unleashing significant compute capabilities without creating energy-guzzling physical data centres and providing the building blocks for a future economy that does not succumb to climate change and a centralised cloud. Carbon neutrality is a myth and not the solution to the cloud’s carbon crisis. It is time for a fundamental shift in how we approach cloud computing.

How you can contribute?

Fixing the cloud is going to require all hands on deck. Everyone is welcome to contribute to our efforts.

Cudos is currently in need of distributed data centres and service providers. Please reach out to us to discuss how we might work together on this goal.

If you currently own CUDOS tokens, consider maximising their value by staking them on our platform and further bolstering our network.

If you’ve missed our latest announcements, here are some of the recent partnerships we are excited about.

United, we can build a decentralised, responsible, and climate-friendly cloud that is responsive to our environmental needs and future generations.