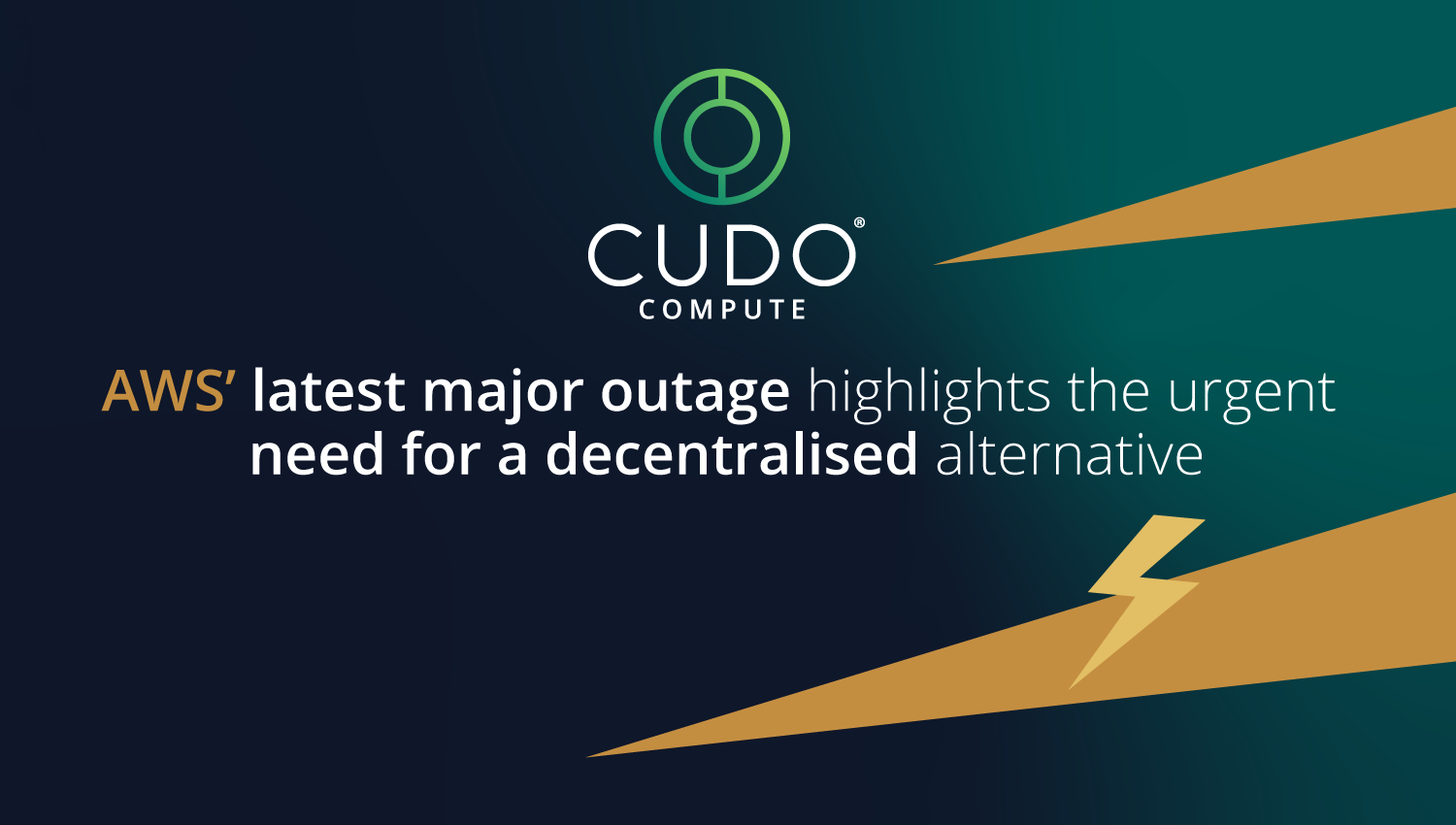 Last night it was reported that Amazon Web Services (AWS) cloud computing arm was suffering another major outage that affected everything from online banking apps, home deliveries and dating apps to streaming, gaming, and even switching on Christmas lights. The outage only serves to highlight the issues with centralised cloud computing.

Thousands of users reported problems on the outage tracking website Downdetector. Large companies such as Disney, Netflix, Tinder and McDonalds reported issues, and everything from Amazon itself with services such as Prime Video and Alexa were hit with problems too.

The cause of Amazon’s third major outage of the year

Amazon said it has identified the cause of the problem and has seen “some signs of recovery” but gave no timescale for a solution, which is very frustrating for many companies who rely on AWS to run. At the time of writing, AWS is still trying to resolve the issue.

Amazon has reported the outage was due to API issues, saying the problem lay with several network devices being flooded with a high volume of traffic from unknown sources.

According to web tool reviewing website ToolTester, Amazon users have experienced 27 outages over the past 12 months. Amazon is among the top 20 websites that faced the most outages in the past year. Alongside Amazon, other major cloud computing companies such as Microsoft and Google also ranked within the top 20.

Who and what was affected by the AWS outage?

The biggest disruption for customers was seen on the US east coast, followed by Europe. There were reports in the US that McDonald’s, Netflix, Disney, Capital One and several other AWS clients were having problems.

Services such as Amazon’s Ring security cameras, mobile banking app Chime and robot vacuum cleaner maker iRobot were facing issues. Other websites and apps affected include IMDb, Disney Plus, Netflix, Coinbase, Venmo, Duolingo, Meetup and Tinder. Ticketmaster also had to move the launch of its presale tickets for Adele’s upcoming performances in Las Vegas due to the outage.

Gaming was also hit, with games such as Player Unknown’s Battlegrounds, League of Legends, Valorant and Clash of Clans, amongst others, also going down. In 2019, AWS boasted that over 90% of the world’s biggest game companies use its services, so the number of games affected by this could be huge.

Delta and Southwest airlines were also affected with people reporting issues when trying to book tickets or change trips. Visitors to Disney theme parks were unable to check-in online or pay for purchases, and others couldn’t check the value of their holdings on crypto exchanges like Coinbase.

It’s not just large companies and apps that are affected either. Those who use smart devices in their home were also impacted. For example, people in the US complained that the outage left them unable to use their Roomba, doorbells, fridges, baby monitors, voice assisted devices and even automated Christmas lights.

The outage also hit many of Amazon’s own services, causing major issues for Amazon’s Ring smart-home systems, Alexa, Prime video and music streaming services. Delivery operations were also affected. One Amazon driver told CNBC that his facility has been “at a standstill” since Tuesday morning.

This AWS outage isn’t Amazon’s first such problem. In fact, it’s not even their first significant outage this year. In June, an outage caused Amazon platforms to go down and several other companies, including Shopify, PayPal, The Guardian, Reddit, Spotify, The New York Times and CNN.

And in July, Amazon experienced a disruption of its online store’s service, which lasted nearly two hours, affecting thousands of users.

AWS provides services to a wide range of organisations and businesses, including governments, large companies and universities. It is the biggest cloud computing company globally, and outages like this can cause huge repercussions to their large number of corporate customers, potentially losing them hundreds of thousands of pounds an hour.

AWS offers cloud computing solutions to nearly a third of the Internet. We have become so reliant on cloud computing that even a partial AWS outage, as demonstrated yesterday, can cause astonishing effects on our daily activities. It can disrupt everything from switching your lights on, watching tv, making a coffee and cleaning your home to getting deliveries, travelling, paying for shopping and remote working.

Cloud computing is too centralised and lacks resilience

This outage highlights the issues with centralised cloud computing. A small handful of technology providers give essential support and services to a wide range of websites and companies. As a result, when one of these cloud providers like AWS goes down, it takes out hundreds of other services.

After a configuration error at infrastructure provider Fastly, which handles 10% of the worlds internet traffic, caused a major web outage earlier in the year, security experts warned that this should act as “a wake-up call” that internet infrastructure has become dangerously over-centralised and lacks resilience.

The cost of outages is enormous. Chris Huggett of Sungard Availability Services told the Guardian that “the average cost of downtime is around $250,000 an hour.” On top of this, an outage that results in a company’s services or site going down can affect organisations digital experiences, damaging their reputation, potentially losing customers and impacting their revenue.

David Warburton of cybersecurity company F5 Labs said after the Fastly outage, “It’s important we consider an approach that moves us away from single points of failure, or we will likely see more issues like we did today.”

The value of decentralised cloud compute

Decentralisation is vital to breaking the cloud market monopoly and ensuring the web is much more robust in future. The AWS outage proves the value of decentralisation, as with a decentralised solution, the ramifications of an outage are not widespread.

Cudos offers a decentralised solution to cloud computing that mitigates the risk of widespread outages due to a central point of failure. By utilising a range of computing resources worldwide, across hundreds of thousands of devices, there is no risk of the kind of outages that impact the centralised cloud. We have created a highly scalable, sustainable, decentralised cloud computing ecosystem by leveraging the Cudos network. Moreover, it ensures that users are not at the mercy of monopolistic centralised providers.

How you can support a decentralised solution

If you want to benefit from a fairer, more robust and sustainable decentralised cloud computing solution, join Cudos now!

You can support our efforts to build a truly decentralised cloud service solution by partnering with us. If you are a data centre and cloud service provider, please contact us today to discuss how we can collaborate.

If you’d like to get an overview of how the Cudos Network is growing, here are some of our recent partnerships we are excited about.

Finally, if you’ve already bought your CUDOS tokens, you can make the most of them by staking them on our platform and thus securing our network.

Ultimately, with your help, we can create a cloud computing market that is not only efficient but fully decentralised, sustainable and kind to our future generations.